In spite of the second of the Group’s Open Studios being quieter than last year’s, a number of the artists had gone to an enormous amount of effort and showed some interesting work. There was a more or less even split between men and women.

Catherine Baker and Alison Marchant both use the East End as source material for their work. Of all the studios, Baker’s seemed to present the most accurate impression of how the artist worked. A number of unfinished canvases, and photographs pinned to the wall suggested a possible approach to her paintings. The finished pieces incorporate images of Docklands and the East End area old and new. Each individual subject is recognisable but in the painting’s entirety the images blur or co-exist uneasily making cognition difficult. The resultant confusion and anxiety reflects Baker’s feelings about the effect that redevelopment is having on the local community.

Marchant opened up her flat as an installation, Interior to Street. The whole house formed part of the work as large images of children and Marchant’s grandmother as a young woman were projected on the walls from slides of archive photographs evoking ghostly images of the types of people who once lived in the house. Corrugated iron blotting out the light and leaves strewn across the floor acted as a reminder that the house will soon be demolished to make way for new developments. A bird-cage hanging from the ceiling projected its shadow over the image of the children reinforcing the notion of struggle for survival of generations of people in that part of London. The pieces were clean and seductively dark, like the room of a museum dimly lit, paradoxically, for conservation reasons, yet the association of images, objects and eras reminded the viewer of the uncomfortable world outside in the East End, past, present and future.

Julia Barton showed an enormous papier mache figure of a woman suspended from the ceiling by a rope which was attached to the figure like an umbilical cord. It represents a departure from her previous work both in terms of scale and sentiment. The figure looked incongruous in the studio surrounded by her more intimate objects and sculptures. Earlier work is more vulnerable and yet shows strength in the serenity of the figures. This new work is less restrained despite the use of the umbilical cord, the universally understood symbol of dependency–it is reaching out in positive expectation, the pose and the reliance on suspension inextricably linking the figure’s history and future life. 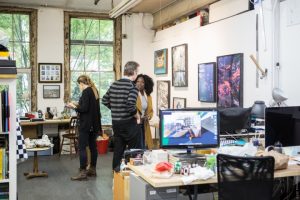 Jennifer Hawkes, also a sculptor, uses traditional materials like stone and metal. Earlier work examines the form of the materials for their own sake, but later work challenges the role of objects in their environment. She deals with large-scale issues and objects, yet the work itself is small. Memorial has the appearance of a medieval candelabra and the title suggests a monumental piece–it is small, made in the present and calls into question the use of traditional memorial symbols. Stone Window has the appearance of a model for a section of a cathedral, but it is a complete piece and is placed in a Fine Art context. Hawkes chooses carefully her materials to reflect the questions raised in the pieces re-establishing the importance placed on materials in her earlier work; for instance Memorial is made from Purbeck stone which is 193 million years old. Her drawings reinforce the issues in her work as they are a documentary of the work in progress, and she maintains that the issues arise during the course of working, not before.

Open Studios are important and are to some extent more useful to the dedicated observer–perhaps the way forward to ‘demystify the artist’ would be to hold workshops in the studios.

Theme by Anders Noren — Up ↑