The early seventeenth century in Russia was the era of the False Dimitry (the Impostor). Sots-art emerged 370 years later (in the early 1970s) as a bastard child of socialist realism, its self-styled heir, or, in Adorno’s terminology, the “secret thelos” of its visual identity. Sots-art is a hole in this identity, a gap which makes the contact with le reel – the third region (register) of psychic experience according to Lacan – possible. Unlike the communal moi, whose perception of authoritarian imagery never goes beyond identification and cathartic bonding, sots-art declares its right to separation. Sots-art works do not attract but repel the waves of the identificatory efforts of the moi. At the same time, sots-art is not at all the Impostor of identification. It is only a “shifter” – a road sign of transition from one register to another, from the Imaginary to the Symbolic order, where figurative rather than specular identification dominates. To the question, “What is the relationship between sots-art and socialist realism?,” one may reply that they diverge as much as the optic of je differs from the optic of moi. Moreover, sots-art is a way of reading a text addressed to moi through the eyes of je. If socialist realism appealed to the communal perception of images, sots-art decommunalized perception (i.e., made it more individualized). The loss of cathartic vision, or “decatharsization,” characteristic of sots-art is due to the fact that these artists thrive on alienation. And since overcoming alienation is one of the principal forms of socialist realism, yet another insurmountable precipice divides it from sots-art. 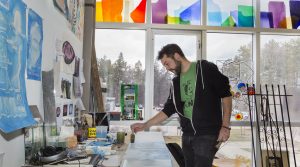 In official art, the identificatory dimension was, of course, dominant. The same is true of sots-art, simultaneously despite and due to its rivalry with socialist realism. Socialist realism and sots-art cannot be regarded as mutually exclusive concepts: their relationship is one of dialogue, not antagonism. That is why one can say that the mutual presence of the authoritarian icons and of their doubles, the icons of iconoclasm, in the works of sots-art has a carnival motivation. In a 1994 interview, Komar and Melamid (K/M) noted:

[S]ots-art could never have been invented by one artist. Only two drinking buddies such as Komar and Melamid could, over many days of talking while decorating a Young Pioneer summer camp, have decided to paint their parents in the style of a poster, and themselves as Lenin and Stalin. Sots-art emerged only because it was a communal kitchen, a conversation between two people. 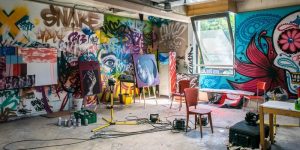 The hunting instincts of K/M are focused on the visual cliches of the socialist realist canon. Their “omnivorousness” spreads to all three functional dimensions of authoritarian iconography. When, for instance, they show Lenin cutting his nails or carrying a skeleton on his back, one can see an attempt to carnivalize the utopian dimension, a desire to shorten infinity. By “reconciling” the incorporeal icon of the leader with his corporeality, with his worldly cares, and therefore with the concepts of life and death, the artists expose the seamy side of utopian rhetoric. Also noticeable here is the influence of the transreferential function, thanks to which the godlike image is placed into an unbiased context. As a result of this debasement, the icon of the leader becomes an icon of iconoclasm. However, events can also develop in the opposite direction: there have been instances in which the debasement of the leader’s image has led to its elevation, immediate or delayed. As Claude Lefort has written, “it is the the natural body [of the leader] which, because it is combined with the supernatuSral body, exercises the charm that delights the people.” This corporeal image of power can be properly called “the demonic body,” in the sense that the demonic – an intermediate stage between the human and the divine – turns out to be a means of unconscious mediation between the two.

Theme by Anders Noren — Up ↑